September 18, 2013
It simply escapes me. The posting, replying, re-posting, re-replying, flaming, touting, bashing, and all the other silliness that passes for online financial commentary. And yet it persists. Most of what gets posted online in financial forums is garbage. Useless crap. Opinion masquerading as gospel. Schoolyard taunts by anonymous bullies. Now, on top of all the nonsense, we have a Wall Street regulator blowing the whistle and walking off a five-yard penalty.
For the purpose of proposing a settlement of rule violations alleged by the Financial Industry Regulatory Authority ("FINRA"), without admitting or denying the findings, prior to a regulatory hearing, and without an adjudication of any issue, Charles M. Matisi  submitted a Letter of Acceptance, Waiver and Consent ("AWC"), which FINRA accepted. In the Matter of Charles M. Matisi, Respondent (AWC 2012033158601, September 11, 2013).
Matisi became registered in 1997 and from 2005 to June 2012, he was registered with MML Investors Services ("MML"). The AWC asserts that he had no prior relevant formal disciplinary history.
Think Seriously
On May 15, 2012, a financial commentator shared her thoughts about Arena Pharmaceuticals, Inc. ("ARNA") on an interactive, online bulletin board. In her opinion, ARNA had ''climbed high" due to the prevailing belief that the Federal Drug Administration would approve the pharmaceutical company's "experimental obesity drug;" however, she noted that Barron's had cautioned investors to ''think seriously prior to going after [ARNA] at present levels" because the obesity drug had to "clear a number of hurdles, notably addressing remaining safety concerns and effects of competition from a reputedly safer and more effective competitor drug."
I'm sure that you've seen just such a post about a stock that you follow.  The poster hasn't slammed or touted (which is a rare online event these days) but observed -- and here the observation was that ARNA's share price had risen in large part based upon an expectation of FDA approval of the firm's obesity drug. The poster cautions about the inherent delays and detours of the FDA approval process.  The poster also seems to be warning that even if approved, the drug faces competition. Not exactly earth shattering news or a particularly shocking commentary.
Idiotic Article
On May 15, 2012, 12:43 p.m., Matisi posted a reply comment on the bulletin board.  The AWC alleges that Matisi posted "via his Facebook profile, which identified him as a "Financial Planner at MassMutual Financial Group." Allegedly, Matisi wrote:

Another idiotic article on ARNA from someone who has no clue what she's talking about..."a reputedly safer and more effective competitor drug" WUS or OREX? LMAO. Brooke do your due dili. There's no safer weight loss drug than ARNA.

Oh my. Seems that Mr. Matisi was incensed by Brooke's post, which he characterized as "another idiotic article" from someone who undertook no due diligence and having "no clue what she's talking about."  On top of that, Matisi is confident that he has done his research and informs us that there is "no safer weight loss drug than ARNA."
Frankly, big deal. How or why does this online jousting become a regulatory matter for FINRA?  Just two online posters trading ideas. Disagreeing. Lobbing verbal grenades. Right?
Well, maybe there's a tad more to all of this than meets the online eye.
Did You Know?
Seems that at the time of his posted comment, about 33 of Matisi's customers owned ARNA shares and he personally owned 10,000 shares of ARNA worth approximately $60,000.

SIDE BAR: During the relevant period bracketing the comments, ARNA traded the following number of shares at the cited closing price: 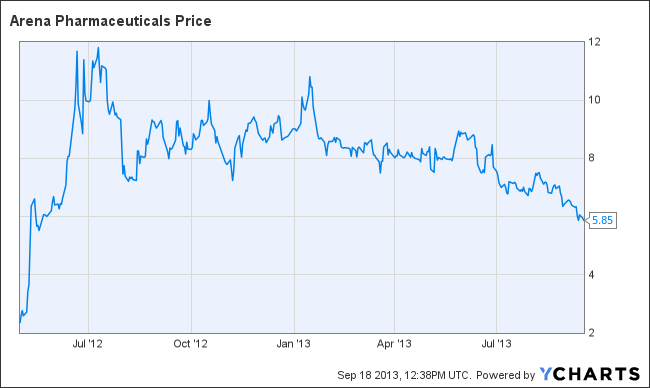 FINRA Rule 2210(d)
FINRA alleges that Matisi's online ARNA comment was in violation of NASD Rule 2210(d)(1)A) and (B) and FINRA Rule 2010 because the posting was
In accordance with the terms of the AWC, FINRA imposed upon Matisi a $5,000 fine and a ten-business-day suspension from association with any FINRA member in any capacity.
Bill Singer's Comment
I dunno -- this is a tough one for me. For starters, notwithstanding that Matisi is a registered person subject to FINRA's jurisdiction, he is also covered by the First Amendment and should be permitted some reasonable latitude in expressing his opinions. Notwithstanding the United States Constitution, we have a long history of jurisprudence and regulation that countenances the reasonable regulation of commercial speech, and it seems a fairly well established proposition by now that a registered person is subject to limits and restrictions about his published comments pertaining to stocks.
If we go to the actual language of the cited sections of FINRA Rule 2210: Communiations With The Public, we come away with this proscription:

(d) Content Standards
(1) General Standards
(A) All member communications must be based on principles of fair dealing and good faith, must be fair and balanced, and must provide a sound basis for evaluating the facts in regard to any particular security or type of security, industry, or service. No member may omit any material fact or qualification if the omission, in light of the context of the material presented, would cause the communications to be misleading.
(B) No member may make any false, exaggerated, unwarranted, promissory or misleading statement or claim in any communication. No member may publish, circulate or distribute any communication that the member knows or has reason to know contains any untrue statement of a material fact or is otherwise false or misleading. . .

Since I am ambivalent about this particular case and in light of the fact that Matisi opted to settle the matter with FINRA rather than contest the allegations at a regulatory hearing, I accept this Decision for what it is.  Still -- it seems pretty clear to anyone who frequents the cesspool of online financial forums that there is little of value posted there and the overwhelming majority of commentary is opinion -- which manifests itself in all its glory, disgrace, nuttiness, and ad hominem nastiness.  To impose the concepts of "fair and balanced" and  "sound basis" upon the raucous online world of financial forums is, at best, a dubious and likely doomed bit of misguided oversight.  Anyone watched a campaign ad lately for one of our upstanding politicians?
Given the unbridled nature of online posting, it's an odd suggestion that a reasonable person would come to such forums with a reasonable expectation of finding anything fair and balanced.  Frankly, these are forums for advocates of buying more than you can afford of the subject stock or shorting the same security beyond your ability to legally cover. There is not the slightest pretense of rational discussion or thoughtful debate. It's love it or leave it. You're either brilliant or an idiot.
Should Matisi have disclosed his long position in ARNA and that of his clients? I'm not sure why that would have mattered. Only a moron would rely upon the representation of professed long or short positions by anyone online. If they say they are long, they may well be short. If they say they own 1,000 shares, they may be short that amount or own 10,000. If they say the are buying a million shares, they may just be jerking your chain.
At the end of the day, however, Matisi did not post online in an anonymous capacity but purportedly came onto the forum via his Facebook handle, which disclosed that he was a financial planner with MassMutual Financial Group.  FINRA asserts, and with some merit, that such a moniker imposes certain disclosure obligations. Perhaps it would be a fair analogy to suggest that if I were on a medical forum researching possible cures for an illness that I might give more weight to a post from doctor from a prestigious hospital who was recommending a particular drug -- but that I would similarly want to know that he was being paid by the pharmaceutical company to promote the drug.  Which still begs the question as to what idiot would undertake a course of medical treatment based solely upon an online posting?
Like I said, my sympathies fall in both Matisi's and FINRA's camp.  Frankly, at the end of the day, I'm not so sure that this matter required a 10-business-day suspension and a $5,000 fine but it's what Matisi agreed to accept.  In conclusion, let me note that some 16 months after Matisi's post, the price of ARNA went from about $6.06 at the close on May 15, 2012, to $5.85 at the close on September 17, 2013.  As the above chart notes, the stock closed mostly between $10 and $12 per share on trade dates June 20 through July 17, 2012.
Also READ:
Permalink