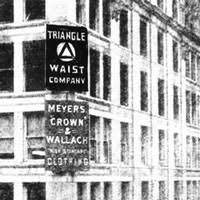 In 1909, New York City's garment industry was beset by a series of strikes that started when the Triangle Waist Company locked out its employees for union organizing activities. Sympathy walk-outs hit the garment industry and the ranks swelled into tens of thousands of employees as the strike spread to Philadelphia and Baltimore.  The Uprising of the 20,000, a now somewhat forgotten labor strike, was largely fueled by female, Italian and Jewish immigrant garment workers, who still lacked the right to vote.  When the workers struck for higher pay, shorter hours, and safer workplace conditions, public opinion was decidedly against them.

Who were these foreigners to demand more money or to complain about their work conditions?  They should be thankful for having a job and living in our country. Hard work never killed anyone. Better they should learn to speak English than waste their time with that union nonsense. Nothing but a bunch of socialists, communists, and anarchists. Women picketing during the Uprising of the 20,000

In one of those quirks of history, the forces allied against the striking women overplayed their hand.  As reports spread that young female strikers were being physically abused by hired thugs and the New York City Police, public sentiment turned in the strikers' favor. Suffragettes from wealthy families  joined the picket lines and often bailed out the strikers following their arrests. Within a few months, the strike settled and some of the workers' goals were achieved, most notably a 52 hour workweek.  Moreover, the Uprising of the 20,000 helped the International Ladies Garment Workers Union (ILGWU) gain traction and members.  What was not achieved by the strike was the implementation of many workplace safety reforms.

In a Hollywood script, there would be a happy ending. The strikers win. Everyone goes back to work. They all live happily ever after. Roll credits.

On March 25, 1911, 146 employees of the Triangle Waist Company perished in a blaze that consumed the factory in about 18 minutes.  As the flames spread, the workers found themselves trapped by locked doors and unable to reach the elevators or stairs. Many of the dead chose to jump to their deaths rather than be burned alive.

Recently, I saw an advance screening of HBO's Triangle: Remembering the Fire, a documentary by Emmy-winning filmakers Marc Levin and Daphne Pinkerson. Triangle: Remembering the Fire takes you back in time to a period when, as the movie notes, the Progressive Era was coming up against the Gilded Age.  It was a time when the tectonic plates of history rubbed against each other and produced societal earthquakes and aftershocks.

And thus, we enter the premises of the Triangle Waist Company on that fateful Saturday, March 25, 1911. It's likely just after 4:45 in the afternoon. Some five-hundred workers are with us as they are clocking out for the day.

Look around, it's not a Lower Eastside tenement but a new commercial building, the Asch Building, a ten story structure on 29 Washington Place in Greenwich Village (right next door to New York University's Law School) that was only completed in 1901.  This is a fireproof building. It's relatively safer and more modern than the downtown sweatshops â€" but "relatively" is not an absolute term. Sprinkler systems were in production but not installed in this building. Five-hundred sewing stations are crammed together on the factory floor. Management has locked the doors from the outside because of fears that workers may try to walk out with scraps of material.

Nonetheless, Triangle is the pride and joy of its owners, Russian immigrants Isaac Harris and Max Blanck.  From a little shop that the two men founded in 1900, Triangle had grown to fill floors eight, nine and ten of the Asch Building.  By some accounts, Harris and Blanck are the Shirtwaist Kings and Triangle is among the leading manufacturers in the industry. On the afternoon of the fire, both owners were at work with their children.

On the eighth floor of the Asch Building, on Triangle's factory floor, there's a spark. Then, a flame. And then a conflagration. Mounds of flammable materials are scattered throughout the premises. The fire quickly spreads to the ninth floor. The floors fill with smoke. Panic. The doors are locked from the outside. Thicker smoke. Not enough room on the small elevator. Then the flames. Trapped. The fire trucks'  ladders are too short to reach the top floors. Bodies begin to hit the ground, some crash through the glass skylights on the sidewalk. 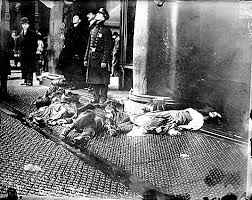 The dead are gathered. Faces are unrecognizable. Many remains are charred. Painfully, the families make the identifications. Sometime it's a father's watch, or a modest piece of jewelry, or a daughter's particular way of braiding her mother's hair. Imagine walking into the makeshift morgue, rows of coffins, about a 146 in all, and the stench of burnt flesh. And as you walk, one after the other, you realize that they're mainly women, young girls, many in their teens â€" burned alive or victims of the injuries they sustained in jumping from the upper floors to the sidewalk below. Six victims were so badly burned that they were buried in a common grave without identification.  The HBO documentary reveals how their identities were subsequently determined over the years.

Criminal charges were brought against owners Harris and Blanck. Ultimately, an all male jury found the two owners not guilty of first and second degree manslaughter. The jury deliberated for less than two hours.

SIDE BAR: For a fascinating and compelling read, please see the Transcript of the Criminal case of the People of the State of New York vs. Isaac Harris and Max Blanck (November 20, 1911).

In 1913, a civil suit was brought by victims against Blanck and Harris. The plaintiffs won and the defendants were ordered to pay $75 per victim. However, since Triangle's insurance company paid out about $400 per victim in gross proceeds to the owners, the fire resulted in a net profit for Blanck and Harris.

As filmaker Daphne Pinkerson told me,  Triangle: Remembering the Fire  "tries to point out the pain that reverberates through the generations as a result of government not representing working people and not regulating business." She believes that the Triangle fire was more than just just another milestone in the labor movement but a seminal event that prompted "a dramatic shift in the role and meaning of government after the fire. As Secretary of Labor Frances Perkins said â€˜The New Deal started on March 25, 1911.'"

Echoing his colleague's sentiments, filmaker Marc Levin added that the Triangle fire was "a starting point. For a hundred years, there's been a kind of progressive direction that's being debated now, that's being questioned now. You can't really enter that debate without a sense of this history."  However, Levin also sets the tragedy in a more intimate place, he believes that "there's probably only one thing worse than losing your life, and that's not being here, not even being acknowledged as having any existence or meaning."

We can argue about unbridled unions and excessive workers' benefits. We can pick and choose the sides when it comes to whether unions remain relevant and the extent to what (if any) government regulation is needed.  We can lament the devastation of American business as our jobs are shipped overseas, where conditions are likely worse than those at the Triangle Waist Company in 1911.  We can question the true cost of those three t-shirts that you paid only $10 for but were made by child labor barely distinguishable from slavery.

Engage in all the academic and impassioned discussions that you wish, but don't lose sight of the simple, human dimension of the hundred-year-old tragedy that occurred at the Triangle Waist Company.  As filmmaker Levin so eloquently reminds us, those men and women who died that day existed, they mattered, and need to be acknowledged.

When we look back at the Triangle fire, we must be careful. We must not fall easy prey to the sentimentality of vintage photographs.  Similarly, we must not minimalize the dimension of that event by too quickly comparing it to 9/11 . To those downtown on that Saturday in 1911, it was no less horrific a spectacle because the victims fell from ten and not one-hundred stories, or because the tragedy was caused by a workplace fire and not a terrorist attack.  As filmaker Levin told me, "We who lived through 9/11, know how just traumatic it was to see people who went to work jumping out a window and falling to the sidewalk.  It is something so traumatizing â€" that way of death, the horror of it and the spectacle of it. "

All of which leads us back to the ledges of the Asch Building.  Where we will likely find ourselves for time immemorial.  Different faces. Similar stories. And the heartwrenching choice that should never be thrust upon anyone.