“Are Your truly dead?” The IMF, Watson and Schrodinger’s Cat.

The other day I opened my email inbox and found an intriguing message from the International Monetary Fund (IMF).  Now to be fair, in my own mind, I'm a very important guy - so, okay, no reason that the IMF wouldn't be sending me an email.

Of course, what really caught my attention was the Subject line of the IMF''s missive: "Are Your truly Dead?"  Being the meticulous fellow that I am, I immediately noticed that the IMF email had some grammatical errors but, then again, since it's the "International" Monetary Fund maybe they were having a busy day and ran out of native English language operatives and a stand-in was asked to send me the message.  That might explain why the message used "Your" instead of the correct "You" and failed to capitalize the "t" in "truly."

Sometimes folks get you at "Hello," and other times they get you at "Are Your truly Dead?"

Spelling and grammatical usage aside, I've reprinted below the entire message from the IMF to me:

I saw your email ( in the Central Computer among the list of unpaid contractors, inheritance next of kin and lotto beneficiaries that was originated from Africa, Europe, Asia Plus Middle east, Americans ) among the list of individuals and companies that your unpaid fund has been located to a Finance Company here in United Kingdom.

Your email appeared among the beneficiaries, who will receive a part-payment of your contractual sum and has been approved already for months. You are requested to get back to me for more direction and instruction on how to receive your fund.

However, we received an email from one Mr. Virgle Lee Samples who told us that he is your next of kin and that you died in a car accident last week. He has also submitted his account for us to transfer the fund to him including his International passport, we want to hear from you before we can make the transfer to confirm if you are dead or not. Please in confirmation that you are still alive, you are advised to reconfirm the below listed information to enable us facilitate an immediate payment to you.

Once again, I apologize to you on behalf Of IMF (International Monetary Fund) for failure to pay your funds on time, which according to records in the system had been long overdue.

Watson, Come Here, I Need You

Obviously,  this is very serious business because Dr. Felix Peterson of the IMF is advising me that I'm supposed to "receive a part-payment of [my] contractual sum."  Lucky for me, Dr. Peterson personally saw some email from me in the IMF's Central Computer that has this list of next of kin and lotto beneficiaries.

I'm a bit puzzled as to how Dr. Peterson "saw" email in the central computer but, what do you think? - am I taking him too literally? Maybe Peterson has some special x-ray vision that allows him to penetrate inside hard drives and servers and to decode the electronic data?

Watson engaged in a Vulcan mind meld with the IMF's Central Computer during a commercial on Jeopardy!

Come to think of it, I saw IBM's super computer Watson on Jeopardy! the other night.  Maybe Watson and Dr. Peterson are buddies and do favors for each other?  I mean, you know, it's possible that Watson has this ability to commune with the IMF's Central Computer and to let Dr. Peterson know what's on there in terms of emails, lotto winnings, and beneficiaries. After all, if Spock could pull off that Vulcan mind meld thing, who's to say that Watson hasn't perfected a similar cyborg thing with the IMF's Central Computer.  Maybe that central computer is a female and Watson has a crush on her?

Dr. Peterson says that Mr. Virgle Lee Samples told the IMF that he's my next of kin and that I died last week in a car accident.   Wow, that really caught my attention. Never knew I had a relative named Samples and I'm sort of pondering how I missed the whole thing about having died in a car accident last week.

Okay, look, last week was pretty busy for me but if I was in a car crash, I'm pretty sure I would have remembered that. On the other hand, sure, maybe it was a really bad fender bender and I got a concussion and that caused amnesia or something. That might explain why I wouldn't remember being in a car crash.

Regardless, try as I might, I can't find any family member who ever heard of this Virgle Lee Samples. What I'm wondering is whether Dr. Peterson may have been confused.

Come to think of it, I did meet a guy many, many years ago who spelled his first name V-I-R-G-I-L, not V-I-R-G-L-E.  As best I can recall, he told me that his name was Virgil Caine and that he served on the Danville train, ‘til Stoneman's cavalry came and tore up the tracks again.  In the winter of ‘65, he was hungry, just barely alive. I had quite a time understanding him because the bells were ringing and people were singing.  However, Virgil Caine was not my relative.

Whoever Virgle Lee Samples is, I'm not understanding why he told Dr. Peterson that I am dead.  I've pinched myself a few times, really hard in fact, and, boy, that hurts.  So, I'm thinking that I'm alive and Mr. Samples is mistaken.

Maybe the IMF email wasn't from Dr. Felix Peterson - maybe it was from Dr. Malcolm Crowe?  I'll have to look into that. Some folks tell me that I have a sixth sense about these things but, hey, you just never know.  Maybe I am dead and see living people?

All of which made me think about Schrodinger's Cat. 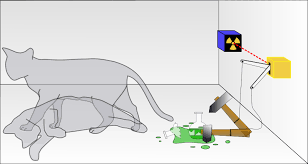 You know, I could be dead.  I could be alive. I could be dead and alive at the same time.  Guess I better figure it out soon and let Dr. Peterson of the IMF know before Mr. Samples gets my IMF check.

I wonder what the going rate is at Forbes when it comes to paying deceased bloggers?