The Most Terrible Crime a Human Being Can Commit

SIDE BAR: The hearing was held in a locked prison visiting room inside the grounds of the prison. The room was approximately the size and shape of a tennis court, with a number of plastic chairs, a few padded chairs, and several banquet tables where the parties, the court reporter, and I sat, and where the witnesses sat while testifying. Quote fromALJ Elliott'sJune 22, 2016, SEC Order,Subparagraph (e) above.
BrokeAndBroker.com Blog obtained an artist's rendering of the hearing room used for SEC v. McDuff, as illustrated below. Readers may note striking similarities to the famous painting "Le Serment du Jeu de paume" ("The Tennis Court Oath") by Jacques-Louis David. I believe ALJ Elliott is the central figure below in black with his right hand raised. Not shown in the illustration is the noisy vending machine. You can, however, see someone eating a microwaveable pizza in the ninth row, third person to the left of the second raised hat: 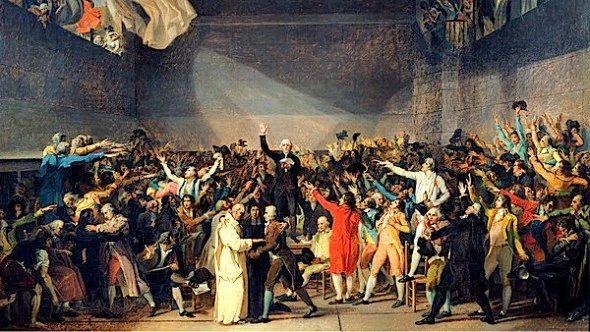 My, how the above illustration brings the SEC hearing to life! You can feel the claustrophobic atmosphere of the hearing as it was conducted in a tennis-field-sized locked, prison visiting room. You can almost hear the clanking -- a loud and disruptive cacophony -- endlessly droning from the drinking fountain. The whole scene is so animated and viewers become so enthralled that we are immediately hungry and clamor for microwaveable pizza or any sort of intriguing "locally popular sausage."
Fifth Canto of Hell
If memory serves me right, the Fifth Canto of Dante's Hell was a locked, prison visiting room with a noisy water cooler where you could only eat frozen mini-pizza, and endless quantities of locally popular sausage. Throw into this comical scene a retired woman with cane (sort of sounds like a Dali or Picasso oil painting, no?). On top of that, add the growing panic of two witnesses who had testified as to all that they could but upon trying to leave the hearing room found that they were locked in and the BOP screws refused to let them out. There were rules. There were policies. There were procedures. There were forms. All of those things conspired to lock-down McDuff, the SEC staff, the ALJ, the reporters, and the witnesses. Was a body cavity search necessary to get into and out of the room?

And so it continues. Achilles dies. The Greeks build a wooden horse. Troy falls. Odysseus attempts to make his way home but is shipwrecked. ALJ Elliott returns to Washington, DC and demolishes a food vending machine at the SEC. One of the SEC Staff realizes that they have left the retired woman with cane behind but when they ask BOP to release her, they receive a letter providing instructions on how to file a Writ of Habeas Corpus.
Stay tuned for the next exciting installment of SEC v. McDuff
Motion To Compel or Motion to Strike
On September 7, 2016, ALJ Elliot considered a Motion to Compel, or in the alternative, a Motion to Strike filed by McDuff on September 2, 2016. In the Matter of Gary L. McDuff (Order Denying Motions, Admin. Proc.Rulings Rel. No. 4132; Admin. Proc. File No. 3-15764 / September 7, 2016) Ya gotta hand it to McDuff, this guy really doesn't know when to quit. In his motions, McDuff argued that Enforcement:

The motions are DENIED. McDuff has not adequately shown how the proposed supplemental evidence is relevant to this proceeding.

The Most Terrible Crime a Human Being Can Commit
Hopefully, we are nearing the end of this long SEC hearing process. ALJ Elliott should be getting combat pay for enduring this seemingly endless war of attrition. Perhaps in the not-too-distant future, McDuff will hear ALJ Elliot echo the words of President-Elect Trump to his adversary Hillary Clinton: "I want to thank you very much, you were a great competitor."
I'm sure that inmate McDuff is having a grand old time jerking around the SEC. He may even be the toast of the town in his cellblock. Yes, McDuff strikes me as a resourceful and clever fellow -- in fact, he may even be very intelligent and probably had a life before him that could have yielded tremendous rewards. In the end, after exerting all his energy and intellect, he wound up getting caught in a droll fraud and sentenced to 300 months in federal prison.
Great con artists don't get caught. Fact is, we never even know that they pulled off a fraud. The truly subtle sting ends without anyone knowing that they have been defrauded. Things just didn't work out like we had hoped.
As such, inmate McDuff shouldn't think himself too much of a hero because he's not. Fact is, he hardly rises to the stature of an anti-hero. When he looks around, he's not on an exclusive beach surrounded by servants. He's not a guest at some remote, expensive, exotic resort dining on gold plates with sterling silver flatware. He's in a federal prison waiting for 300 months to pass. It's all fairly summed up in that wonderful film "Papillon"
Permalink