Tucker Carlson, AOC, and the 70% Tax Rate
by Aegis J. Frumento, Partner, Stern Tannenbaum & Bell
Fox News' Tucker Carlson and Congresswomen Alexandria Ocasio-Cortez (AOC to her fans) found themselves singing from the same tax hymnal this week. But no one should think they were on the same page.
Tucker started off the new year with a rant against Mitt Romney for being critical of President Trump. He doesn't try to defend Trump -- that'd be too much work. Rather, Tucker attacks "elites" like Mitt for being oblivious to the real concerns of the rest of us. https://fxn.ws/2RpqRZa. His surprising main point is that our economic system is rigged in favor of the already well-off. Our tax code, thunders Tucker, is "based on . . . laws that companies lobbied for in order to increase their economic advantage. It worked well for those people. They did increase their economic advantage." As a result, Mitt's top tax rate is only 14% while Tucker's is 40%, and that really pisses him off.
Tucker urges both libertarians and social conservatives acknowledge that "Market capitalism is not a religion. Market capitalism is a tool, like a staple gun or a toaster. . . . We do not exist to serve the markets. Just the opposite. Any economic system that weakens and destroys families is not worth having." The opioid crisis in rust-belt America having opened his eyes, Tucker now proclaims "Culture and economics are inseparably intertwined. Certain economic systems allow families to thrive. Thriving families make market economies possible. You can't separate the two."
Wow! Send the guy an Elizabeth Warren sticker.
I'm not a Tucker Carlson fan, but when he's right, he's right. But here he's only as right as a stopped clock twice a day. "Unfairness is profoundly divisive," he writes. "When you favor one child over another, your kids don't hate you. They hate each other." Yes, it is unfair that Mitt pays only 14% on his oversized income when working stiffs pay 40%. But Tucker would be satisfied if Mitt paid at the same top rate as he does, or more likely if he paid the same low rate as Mitt. He's not man enough to follow his own logic where it leads.
AOC, however, goes there. On 60 Minutes last Sunday night, she went where no politician has had the balls to go for decades. She advocated increasing the top marginal tax rate back up to 70%, essentially undoing every tax cut all the way back to Reagan. https://cbsn.ws/2CU6IlV. Take that, Mitt!
Only people who don't know their history think AOC's proposal is radical. Before the Reagan tax cuts of the mid-1980s, the top marginal tax rate in the U.S. was 70%. During the earlier Eisenhower years the top rate was 91%. To suggest, as AOC proposes, that earnings above $10 million should be marginally taxed at 70% is not radical at all. The history of top tax rates shows that in fact, such high rates have been the norm as far back as 1918:

In fact, the lowest rates were in the years immediately before and during the crashes of 1929, 1987 and 2007-2008. It's not a coincidence.
AOC is right to put high top rates back on the table, but not for her reasons. She thinks that the high marginal rate will raise over $70 billion a year with which to fund a "Green New Deal." I doubt that. Tax rates just don't seem to affect revenues. Tax revenues simply increase in boom years and decline in lean years, and they've oscillated between 15% and 20% of GDP for decades. The argument for lower tax rates has always been that they would drive a booming economy. Paul Krugman in The New York Times argued the contrary, that the country's most robust growth in fact occurred in the 50s, 60s and 70s when high marginal rates were in effect. https://nyti.ms/2Rfni8v. Krugman published this chart to prove his point: 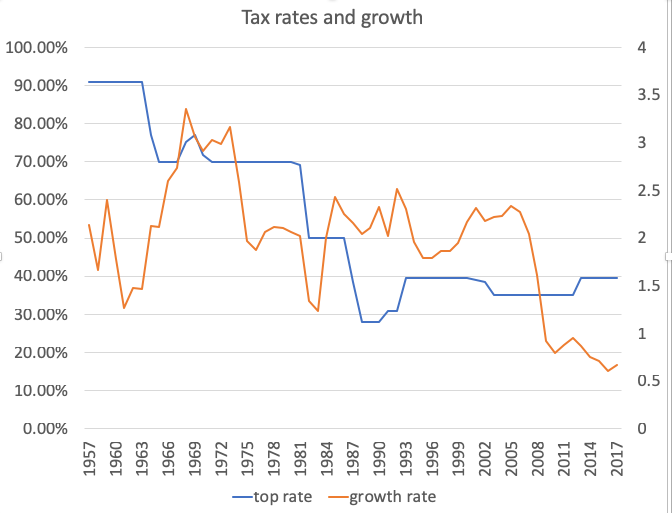 But the same chart also shows that from 1984 until the Great Recession, low rates correlated with higher growth rates. Again, there were growth and recessions both during and after the high-marginal-tax-rate era.
The only historical truth here is that corporate executive compensation skyrocketed from about 50 times average worker pay to between 200 and 350 times just when the top tax rates began their decline from 70%, as this chart shows:
Correlation does not necessarily mean causation. One study concluded that tax cuts were responsible for about a third of the rise in CEO pay ratios. https://stanford.io/2RDXKkJ. Even a third is a lot, but I suspect that the remaining two-thirds, related to the greater use of stock options, were also indirectly catalyzed by wealth-friendly tax policies. That's what another study suggested, even while concluding that the direct impact of tax rates on compensation was small. https://bit.ly/2FldUsO. Whatever the mechanism, it should surprise no one that corporate executives would find ways to put more money in their own pockets once they were incentivized to do so by lower high-end tax rates. Who can blame them? And don't forget that high CEO pay pulls up the compensation of everyone else in the executive suite. Even some corporate general counsels make $5 million or more. We can fairly debate whether any typical CEO is worth what they're being paid, but believe me its hard to justify any lawyer making $5 million a year in a no-risk job.
My own view here is simple. I think -- I hope -- that disincentivizing high executive compensation will force corporations to spend their profits more wisely.
Does anyone really think many people paid 91% or even 70% of much of their income in taxes? What would you do if you had the choice between paying yourself an extra dollar, 70 cents of which would be taxed away, or spending that dollar on a tax-deductible business expense? When the top tax rates were 91% and 70%, corporate employees were paid decent middle-class incomes and disposable income. They had funded pension plans. They had medical insurance at company expense. When Tucker Carlson writes longingly for "a country where normal people with an average education who grew up in no place special can get married, and have happy kids, and repeat unto the generations," that's what he's talking about.
And not just workers. Corporate middle managers had offices instead of cubicles, personal assistants and generous expense accounts. Say what you will about the three-martini-lunch -- and none of us today is capable of matching those giants of yesteryear anyway -- they kept waiters, barkeeps, chefs, and all who supported them well-employed. Those were also the heyday of the great corporate research and development labs. Bell Labs invented the transistor, upon which everything we touch today depends. IBM's and GE's labs created the modern computer, and Xerox's Palo Alto Research Center invented what became the Windows we all use today.
Back then, corporate executives got more than personal wealth. They reaped the psychic rewards of being leaders of great institutions with contented workers in decent cultures engaged in socially beneficial activities. They were certainly far more respected than they are today. It would be nice to return to that ethos.
Don't get me wrong. I know that raising the top rate will not get us back to the  60s and 70s. It's more complicated than that, and much of those years -- the music aside -- is best forgotten. But our economy is rigged to flow wealth and income disproportionately to the fortunate 10% who have at the expense of the 90% who have not, and that, as Tucker correctly says, is destroying us. Raising the top rate may be no more than one small corrective measure. We should do it anyway.
ABOUT THE AUTHOR
Aegis J. Frumento
Stern Tannenbaum & Bell
Co-Head, Financial Markets Practice
afrumento@sterntannenbaum.com
380 Lexington Avenue
New York, NY 10168
212-792-8979
Aegis Frumento is a partner of Stern Tannenbaum & Bell, and co-heads the firm's Financial Markets Practice. Mr. Frumento represents persons and businesses in all aspects of commercial, corporate and securities matters and dispute resolution (including trials and arbitrations); SEC and FINRA regulated firms and persons on regulatory compliance issues and in SEC and FINRA enforcement investigations and proceedings; and senior executives of public corporations personal securities law and corporate governance matters.  Mr. Frumento also represents clients in forming and registering broker-dealers and registered investment advisers, in developing compliance policies, procedures and controls, and in adopting proper disclosure documents. Those now include industry professionals looking to adapt blockchain technologies to finance and financial market enterprises.
Prior to joining the firm, Mr. Frumento was a managing director of Citigroup and Morgan Stanley, a partner and the head of the financial markets group of Duane Morris LLP, and the managing partner of Singer Frumento LLP.
He graduated from Harvard College in 1976 and New York University School of Law in 1979. Mr. Frumento is a frequent author and speaker on securities law issues, and is often quoted in the media on current securities law developments.
NOTE: The views expressed in this Guest Blog are those of the author and do not necessarily reflect those of BrokeAndBroker.com Blog.
Securities Industry Commentator
A legal, regulatory, and compliance feed curated
by veteran Wall Street lawyer Bill Singer
http://www.rrbdlaw.com/4376/securities-industry-commentator/
FINRA member firm's arbitration blows up in its face as former employee wins.
In the Matter of the Arbitration Between William and Henry Associates, Claimant/Counter-Respondent, v. Anna Marie Jacob, Respondent/Counter-Claimant/Third-Party v. David Joel Iannini, Third-Party Respondent (FINRA Arbitration ),
GUEST BLOG: Tucker Carlson, AOC, and the 70% Tax Rate by Aegis Frumento Esq (BrokeAndBroker.com Blog)
Barred for Starting Broker-Dealer
In the Matter of Charles Gonzalez, Respondent (FINRA AWC)
Fine and Suspension for Discretionary Trading
In the Matter of Gregory Rusnak, Respondent (FINRA AWC )
Permalink